I wanted to share some of my images from the recent Morocco photo tour with you. I had limited mobility but still managed to take almost 2000 images. We had a great bunch of people, an amazing guide, and we all had a lot of fun.

One year previous, in 2016, I took my first journey to this exotic land as I led my first Morocco photography tour. We did it all again just recently and because of my ankle (the Colombian incident), I brought along a co-leader, Daniel Korzeniewski. You’ll be hearing a lot more about him as he will be leading the tour for us in 2018 as well as one to India that we’re working on.

If this magical place is on your bucket list – this is also the official launch for registrations which are now opened for the 2018 Morocco photo tour. The waiting list had the first crack at it a week ago, and now it’s up for grabs.

With only 10 spots this year, this photo tour sold out in less than a week.

If you’re interested in being notified first when a tour is available, we encourage you to put your name on our waiting list. We offer tours to wait list members first, before opening it up to the general public.

Put your name on our photo tour waiting list here.

Here’s how this year’s tour went down:

We spent our first couple days getting oriented and used to our new time zone by staying in Casablanca. It’s a port city so pretty commercial but there are still lots of interesting things to see.

After leaving Casablanca we made a short stop in Rabat, the capital of Morocco. Our stops included the Chelleh (a fortified metropolis) to see the ancient ruins and storks nesting and the mausoleum. I share photos of the latter from last year so I decided to show you the neat fellow we met there instead. He’s a water seller. Locals pay him and he pours a cup of water for them to drink. And he sure was happy to pose for us, SO HAPPY.

Chefchaouen is the blue city of Morocco. It’s up in the Rif mountains in the northern part of the country and is a bit of the way to get to – but SO worth it. Many tours do not visit there due to the distance but among our tour participants, it’s always a favorite. One lady with us on this trip has waited many years to get to return to Morocco and was looking forward to finally seeing Chefchaouen – she was not disappointed and bought some local art to take home with her to remember it.

En route to Fes and Fes

From Chefchaouen we continued our journey on towards Fes. As one of the oldest cities in Africa and the world, Fes dates back to the eighth century! Inside the Medina walls, life continues as it has for hundreds of years.

There are over 9500 tiny alleyways in Fes, none of which are labeled or named that I could see and no one single person knows them all. There are no maps of them either. Needless to say, we were guided through the Medina and out, and we sent guides with our tour participants in smaller groups when they wanted to wander and explore. We lose nobody on our tours!

The famous tannery in Fes

At the Chouara tannery, They still use the same technique they have for 100s of years. A toxic mixture of cow urine, quicklime, water, and salt is used to remove hair and excess fat from the hides. After they are scraped they are then soaked in another mixture of pigeon poop and water to soften the hides. These steps are done in the white wells you can see below.

Sprigs of mint are given to visitors which you can use if you find the smell overwhelming. I didn’t use it but it is pungent that’s for sure.

The workers do this all by hand but they must use rubber boots and gloves on the first solution as it will literally eat their skin. There is no machinery used in the process. The hides are then dyed using natural coloring and stomped on my foot in men with bare legs and short shorts. It’s a bit odd to see in such a conservative country until you see them doing it, then it makes sense. 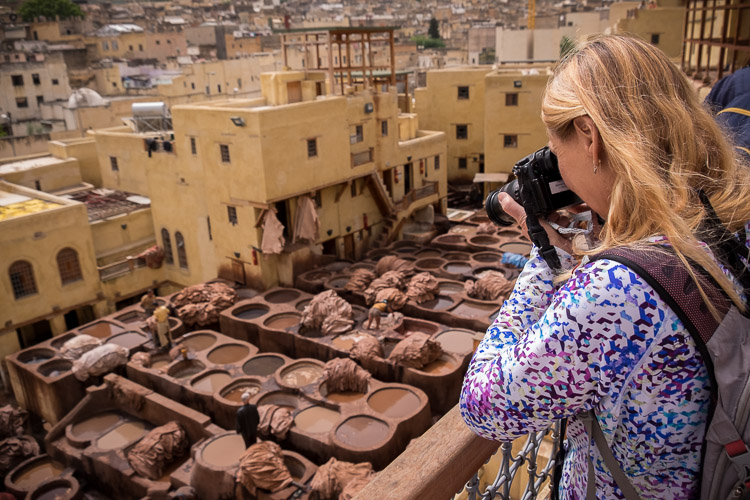 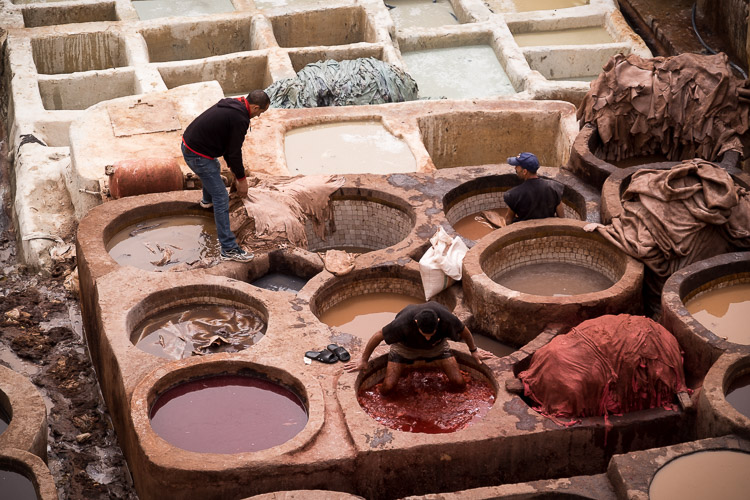 The Sahara is a magical place. It’s hard to describe the feeling of being there. The sand dunes are unlike any I’ve ever seen, and it’s a chance to kick back, get off the grid, just relax and take it all in. Or, you can hop on an ATV or a camel and head off into the dunes like we did and spend a night in a Berber tent for a chance to see the stars away from all civilization and maybe take some night photos. 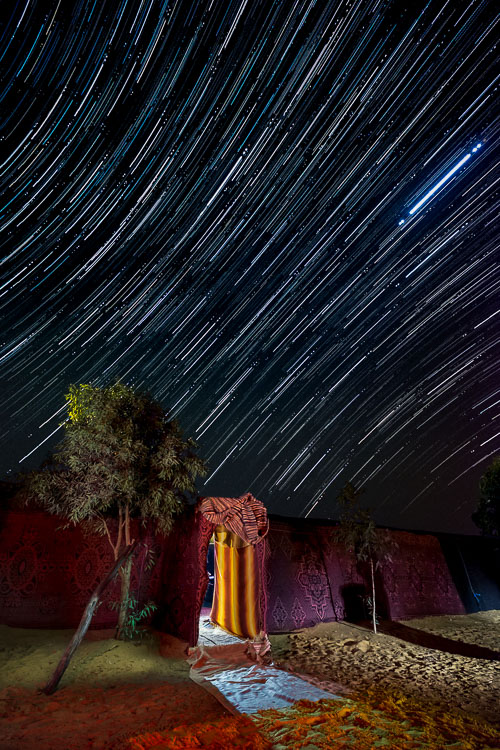 This image above was created over about 45 minutes. It is 65 images shot at 30 seconds each, stacked using StarStax (learn how to do that here). Then we did some light painting and got lucky as a couple of the guys came and went into the tent and I added those in as layers in Photoshop and masked them together to produce this final image.

I’ve compiled a selection of Photoshop tips and tutorials here if you’d like to learn more.

From the desert, we traveled west again towards the city of Ouarzazate, famous for many movie companies that work there and many films that were shot in the area.

Ait-Ben-Haddou is a Ksar (a group of earthen buildings surrounded by high walls and watched by corners towers) and is a Unesco World Heritage site. Many movies have been filmed in and around it including recently the Game of Thrones and most famously, Gladiator. The list is long!

Over the Atlas Mountains and the end of our journey

The next leg of our journey involved driving over the High Atlas mountains. What an interesting road! We also made a stop to see the women making argan oil and may have bought some as well.

Our final leg as Marrakech. I wasn’t feeling well that day so pretty much stayed in the Riad – thanks, Daniel – and as it rained that night the slick pavement also wasn’t a good idea for my unstable foot. So I sat that one out.

By the way, David told me this was shot using a Canon G7X Mark II (compact camera) at 1/80 sec, f 2.5, ISO 800. Pretty impressive for a little camera – proof you don’t need to bring tons of gear with you to enjoy this tour and bring home images like this!

We did return to Casablanca for a final dinner and flights home, but next year we’re ending in Marrakech which will allow people to add on a side trip to the coastal town of Essaouira.

Hopefully, you’ve been inspired by these images in some way. Now it’s your turn to find your own creativity and seek some adventure. That could mean joining a local photo walk, taking a class, or taking on a project of your own. Or maybe you’re ready to tackle an item on your bucket list.

If you are ready to take a big adventure and want to join the Morocco photo tour 2018, I have good news. Registrations are now opened! Just click the link or the photo below for more info. 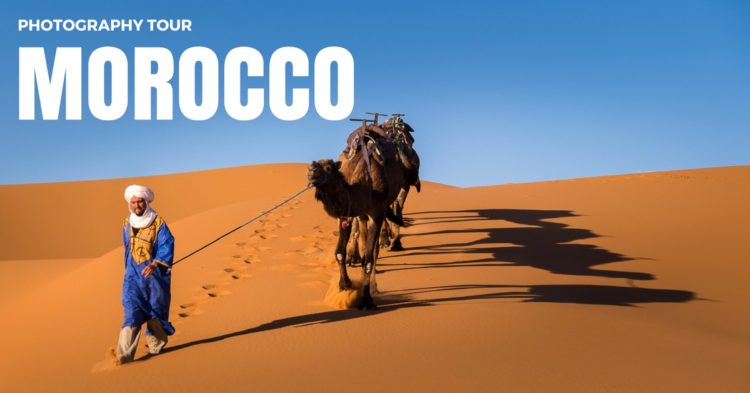 Don’t take just my word that this is an amazing journey. Here’s what some of this year’s participants had to say about their experience:

Favorite memories: The blue streets of Chefchaouen. The amazing Milky Way at the Berber tents at 4:30 am. Reflection shots in Marrakech after the downpour. Numerous meals where I tried different things. The awesome views through the Atlas mountains. The model shoot (in Fes). Thank you so much. Had a ball and will never forget it.– John P. (Australia)

Thank you for a very well run tour, and ensuring that people had a great time as well as learning to improve our photography!– Mary M. (USA)

Sahara camping trip. One of a kind experience. Medinas and markets. I love the sights and sounds, the crowds, the interesting people, the magic, and the uniqueness. – Jack Z. (USA)

My jaw was dropping at so many places. Diversity within this country – amazing. – Joan R. (Canada)

Favorite memory: Going out later at night with Daniel and a few others on mini photo walks. We did it several times. Enjoyed them all.– Salle-Ann E. (Australia)

I really needed this opportunity to lose the fear of clicking, to see the camera as a part of my body, a toy I love to play with, a BFF. What to look for, details, include people as a point of much interest, how others look at a scene, bending low, searching other angles, other types of light. Practicing is much different than simply learning the theory. Darlene, I really enjoyed this trip and hope to participate in many others. – Lucia S. (Brazil)

Get info on the 2018 Morocco Photo Tour

Get more information or book your spot for Morocco 2018 now.