I love doing night photography and I was eager to put my new Fuji X-T1 to the test with some low light subjects to see how it performs. I have to say I am really pleased with the results and in this article I’m going to show you the images as they developed, and share a quick tip on adding light for more depth to your night photography images.

While in the city of Trinidad on our recent photo tour to Cuba my husband and I were walking back to our casa (like a B&B you stay in someone’s home) one evening and as happens around pretty much every corner there we stumbled upon a classic car begging me to photograph it (image above).

Part one – timing the shot right
The first part of this tip for adding light, especially when photographing in an urban area, is to make sure you have patience and time your shot just right. In the image below you can see a streak on the left side of the image from a car that drove past during the exposure. That was not an accident!

Let me repeat that. Getting the headlights from the passing car in my shot was done on purpose. I know it would light up the street behind the car and the cobble stones and add some depth to the image.

So have patience, take a few shots, and think about what you want in your image. Then if you need a car or person to appear in your image – wait until you get it to press the button. Here are two more images I took as different cars passed. Notice I changed the exposure times see what effect longer shutter speeds would have on the shot

After taking the first shot, evaluate the entire image. In doing so I found the car front to be lacking in light and really dark. I mentioned it and my husband, Rob, suggested he could add some with the light from his cell phone. Why not I figured – so we did and got this image.

Note – make sure you have enough time to “paint” with light

Painting with is a more in-depth article, something I’ll cover another time. But in essence this is what Rob has done for me in the image above. The big key to painting with light is you need to have a long enough exposure to be able to enter the scene, paint some light on the subject, and walk out again. 4.5 seconds (as in the shot previous) is not enough. I usually recommend you have at least 10 seconds or more – hence the change from f/8 to f/13 and the corresponding adjustment of the shutter speed to 15 seconds.

Here’s a second image with the light coming more from the side of the car. Can you see the difference it makes to adding more texture to the grill area compared to the one above?

Turn the lights on

The neat thing about cars is that you can add light to make it seem like the headlights were on. To do that just get right up to the bulb in the headlight and just rotate your flashlight or light source around in it a bit.

The cell phone was actually touching the headlight in the next two images. We did a couple so I could have variations to pull from later.

Before I show you the final shot which was combined from all eight other shots in Photoshop let me just preface it by mentioning this:

I am not a big fan of the “fix it in Photoshop” mentality.

That is not what I’m advocating here.

This is one time when being able to use layers and masks is one of the best, and sometimes the only way, to get the shot. I’ve done painting with light way back in the day with film and trust me – it was WAY harder! You had no idea what you were getting and sometimes came home with an entire roll of garbage – only to have to go out the next night and try again.

Now with digital you can see what you’re getting, and you also have the added ability to combine images so you don’t have to get the painting part perfect in one single image. Like I said above that’s not always possible.

So here it is – the combined final image put together in Photoshop, ghosts all masked out so they are hidden, and tweaked a bit in Lightroom afterward. 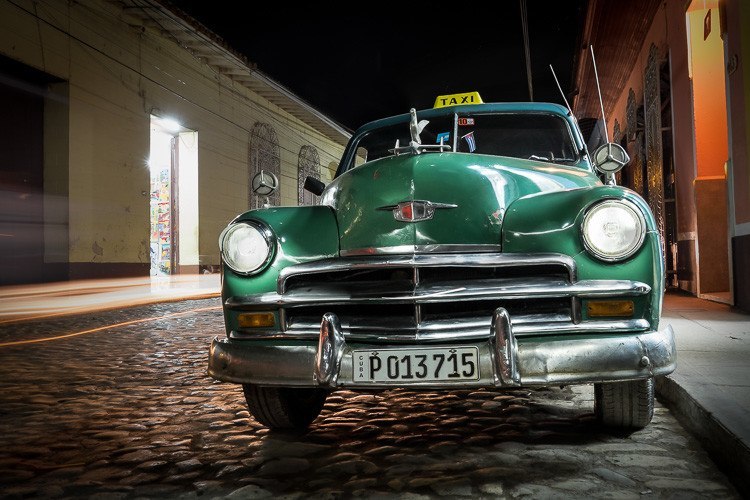 How shiny it looks! See how dead and lifeless the car looks in the very first image at the top of the article compared to this finished one. The important thing to remember here is:

THE CAR WAS LIT WITH A CELL PHONE – YOU CAN DO THIS!

Now it’s your turn. If you haven’t tried night photography now is the time. If you need more tips on general settings for night shooting try these articles:

Share your images in the comments and let me know if you have questions.