In this review, I’ll give you the good and bad (there isn’t much of that) and the low-down on the Rokinon 8mm fisheye lens for APS-C crop sensor cameras. See why I rate it 4.5 stars out of 5 and why I think you should have one in your bag.

First of all, you should know that this is a third-party lens AND that is not necessarily a bad thing. Manufacturers like Tamron and Sigma make fantastic lenses.

But, so does Rokinon!

So don’t let the fact it isn’t made by Canon, Nikon, Sony, or Fuji scare you away. This is a solid fisheye lens option for the budget-conscious photographer who wants a super-wide angle.

Here is a quick list of the pros of the Rokinon 8mm f/2.8 fisheye lens.

Let’s look at each one of those points a little closer. 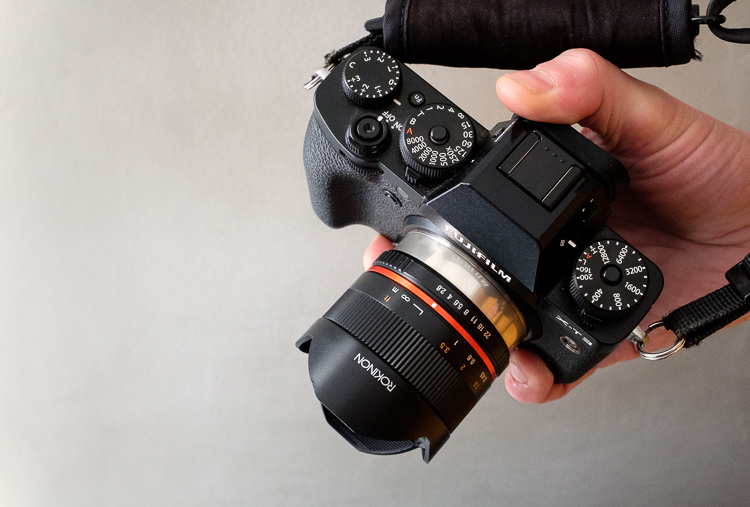 At just under $250 USD, this is a great lens to get if you’re interested in super-wide-angle photography. For comparison look at these brand name lenses that are hundreds of dollars more expensive.

Look for the Rokinon 8mm f2.8 fisheye lens for your camera mount here.

The next advantage of the Rokinon 8mm F2.8 fisheye lens is its size and weight. Here are the actual specs from the manufacturer:

This lens literally fits in the palm of my hand, as you can see below. So it’s a no-brainer to throw it in my bag whenever I am traveling or go to a photoshoot.

It takes up very little space and adds very little weight to your bag and it’s nice to have just in case you want to try something different.

Considering the price of this lens, the image quality is remarkably good. Many wide-angle lenses are plagued by chromatic aberration. Usually the less expensive the lens, the worse it is.

Note: Chromatic aberration is an undesirable color fringe around the edges of objects in your images, usually near the edge of the frame. It is caused by improper focusing of the red, green and blue light channels (RGB).

But this lens has very minimal aberration, and it’s an easy fix in Lightroom or your preferred image editing software. Have a look at the screenshots below of one of my images close-up to see what I mean.

I find the lens to be sharp overall and I haven’t seen any issues with the edge-to-edge sharpness either. Overall, I can’t fault this little lens for image quality at all.

If you want to get into doing night photography and shooting things like star trails and the Milky Way, then you need a fast lens (one with a relatively large maximum aperture). Once again the Rokinon 8mm fisheye fits the bill with its f/2.8 aperture.

The wide-angle of view provided by the 8mm lens and the f/2.8 aperture allowed me to get the shot above. It’s harder to shoot astrophotography with a lens that only goes to f/4 or smaller.

So this one is a great option if you want to do this kind of photography.

I also love using it for shooting architecture.

But just be aware of the image distortion if you do so as well. Don’t expect nice straight lines in your buildings. They will be curved, but for me, that’s the fun part of a fisheye lens. I’m taking photos for me not doing real estate photography which is a different ballgame.

Available for Most Camera Mounts

Another great thing about this lens is that it is available for pretty much any camera mount. Shoot Canon, no problem. Sony? Coming right up! They even make it for Mirrorless 4/3s mounts (Panasonic and Olympus) and Pentax.

If you’re already convinced that you want to put one of these in your bag, look for the Rokinon 8mm f2.8 fisheye lens for your camera mount here. 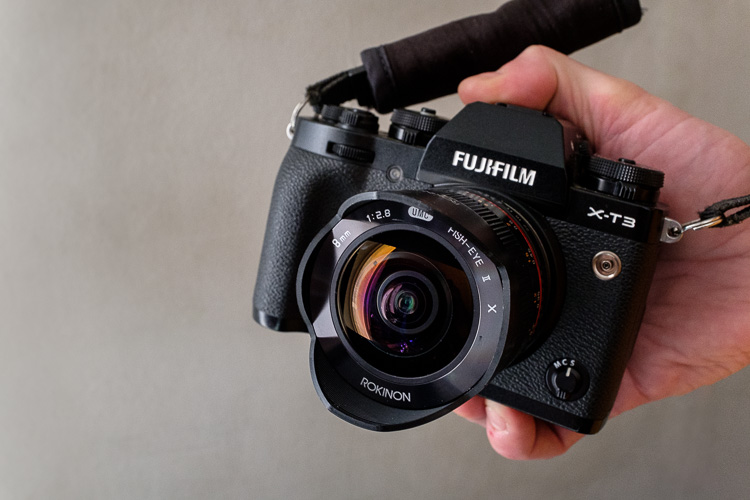 For me, the biggest pro of this lens is how fun it is to use and shoot with. You do have to think and approach composition a little bit differently than you normally do, but those are good things. Keeps you on your toes.

It’s just such a unique angle of view, not at all how our eyes see the world. So by using a fisheye lens your images will automatically grab attention (if you follow a few tips for shooting wide).

Here are a few examples of things I’ve photographed with the Rokinon 8mm fisheye.

I just think the second and third images above are more interesting because they make viewers stop and think for a second. Their brain is like, “Wait, what?!”

That’s a good thing. It makes them want to look at the image longer, go deeper to figure out what’s going on.

As I said earlier, there isn’t much not to like about this lens. But there are a couple of things that could be construed as cons. I personally don’t think they’re an issue, but you need to be aware of them.

If you’ve never used a manual focus lens don’t be overly concerned about it, it’s not that hard.

With a fisheye lens, pretty much everything is sharp anyway. Just set the aperture to f/4 or f/5.6, then set the focus to 2 feet (using the distance ring indicated in red below) and off you go!

Note: You also need to dial in the aperture on the lens itself. You cannot adjust the aperture setting on your camera as you do for your other lenses. Just turn the ring on the lens to the desired aperture (indicate in blue above), that’s it!

It’s super freeing, just can just shoot and not worry about focus! Set your camera on Aperture Priority and Auto ISO and you’re good to go.

Note: Just because you are shooting with a manual focus lens does NOT mean you also have to shoot in Manual Mode! The two are not mutually exclusive or linked.

Doesn’t Send Data to the Camera

Something else you need to be aware of is the fact that the lens doesn’t send data to the camera. On my Fuji, it shows the aperture as F0 (red box below) and it records the focal length as 21mm (even though it’s 8mm).

The metadata isn’t sent because it doesn’t make the same connection to the camera that your other lenses do. But it doesn’t have to be a big deal either. 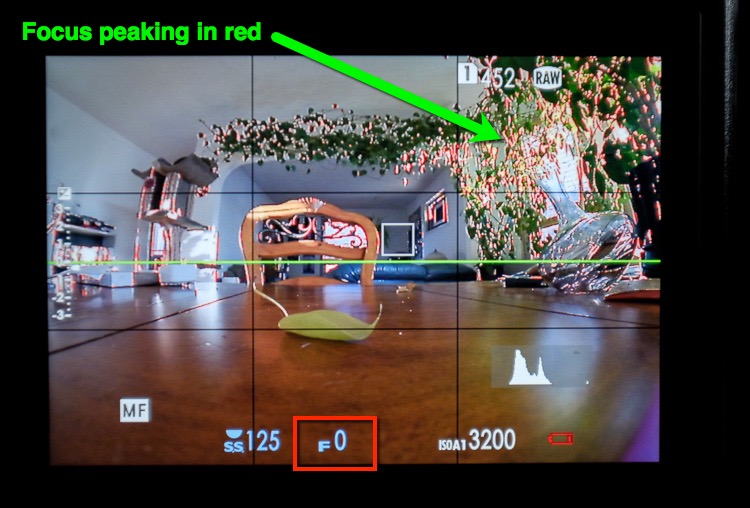 Notice the red outline on everything in the shot of the back of my camera above? That is called focus peaking and is a feature that is available on most mirrorless cameras.

If you shoot with a DSLR you may have something similar in Live View mode, check your user manual. If not, just go with the set it and forget it method I mentioned above.

To make sure that your images are sharp, just hit play to review them and zoom in to check. If they aren’t, try a smaller aperture, or focus at a different spot. I usually use 2 feet because you have to shoot really close to the subject with a wide lens of this nature.

Things to watch out for using a fisheye lens

There are a few other things you need to be aware of and watch out for when using any fisheye lens, not just the Rokinon 8mm.

Filters are a no go

There is no way to use filters with a lens this wide. You just end up with lens cut-off (black corners on your image) or the filter is in the photo.

While the shot above is fun, it’s not going to win any awards. So really, filters are not possible when shooting with a fisheye lens. Unless you get one that has drop-in filters that go in the back of the lens but those are a lot more expensive lenses. A lot more!

Shoot without a lens on Fuji cameras

There is a setting on Fuji camera (it may be different on other cameras) that allows you to “shoot without a lens”.

If you use Fuji too, find that and turn it to ON.

Because the lens doesn’t communicate with it, the camera doesn’t think there is a lens attached at all and unless you change that setting it won’t let you take a photo.

Because the angle of view on a fisheye is so wide, they’re prone to lens flare frequently.

But knowing this you can easily avoid it, or use it to your advantage. 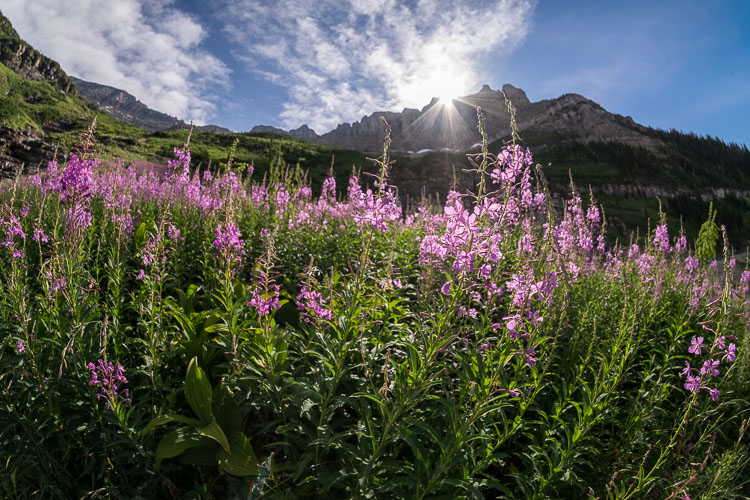 For more on creatively using flares to your advantage read this: How to Create Sun Flares for Effect In-Camera.

While you want to be careful when photographing people with an ultra-wide lens like a fisheye, that’s not to say it’s impossible or that you shouldn’t do it.

Just be conscious of where the person is placed in the frame. The closer to the edge they are, the more distortion will occur. So if you want less, just put them more in the center of the image.

When setting up your composition with a fisheye lens you need to get close, avoid yourself in your photos, and watch for distortion of your subjects.

And by close, I mean REALLY CLOSE! Like inches mostly. The Rokinon 8mm can focus at about 9 inches, and most of the time I aim to be about a foot from my subject. 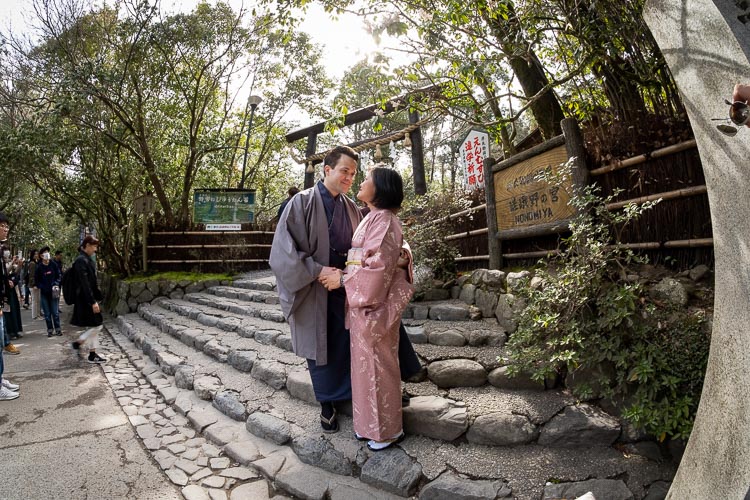 Here I’ve placed the models in the middle of the frame to minimize distortion. But see what’s happening on the edges? Someone’s hand and people entering the frame on the left.

It’s really hard to even keep your own hands and feet out of the shots sometimes. So really pay close attention to the edges of your frame when shooting with a fisheye.

Well, I hope you’re convinced or at least intrigued to try out a fisheye lens. If you’re ready to give it a go, I do highly recommend the Rokinon 8mm F2.8 Fisheye Lens.

You can’t beat it for bang for your buck, image quality, and usability. Get one today, put it on your bag and take it for a spin.

Do you already have a fisheye lens? Which one do you have? Let me know in the Disqus area below and if you have any questions please ask.