Great shots can be achieved in low light conditions, even without spending a lot of money on expensive lenses with big apertures (although that does help). This issue comes up a lot in my classes and on my recent photography travel tours to Cuba and Nicaragua. I’ll be using images from the Cuba trip here as examples. 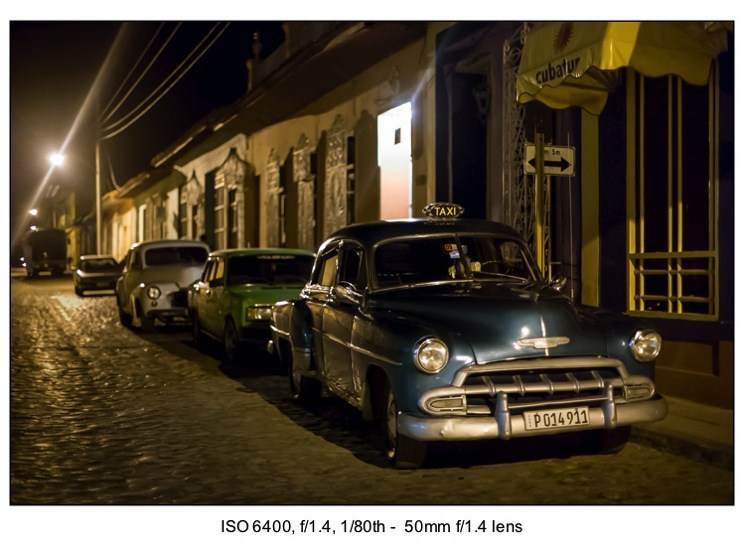 In this article I will cover some simple things you can start doing right away to get better images in tricky, low light situations.

#1 DO NOT BE AFRAID OF USING A HIGH ISO

Most of the example images in this article were taken at high ISO settings from 3200 all the way up to 12,800. Those are numbers that only a few years ago were unheard of, but with today’s newest cameras (even most of the entry level models) it is a real and viable option.

Yes it is true you will get increased noise (funny looking speckles) in your image but the other option is getting a blurry image due to a slower shutter speed. What cranking the ISO does is allows you to also increase the shutter speed. ISO, shutter speed and aperture are like teeter totters. If one changes, then one of the other two have to adjust to keep things (the exposure) constant.

Let’s look at a couple of examples of low light photos: 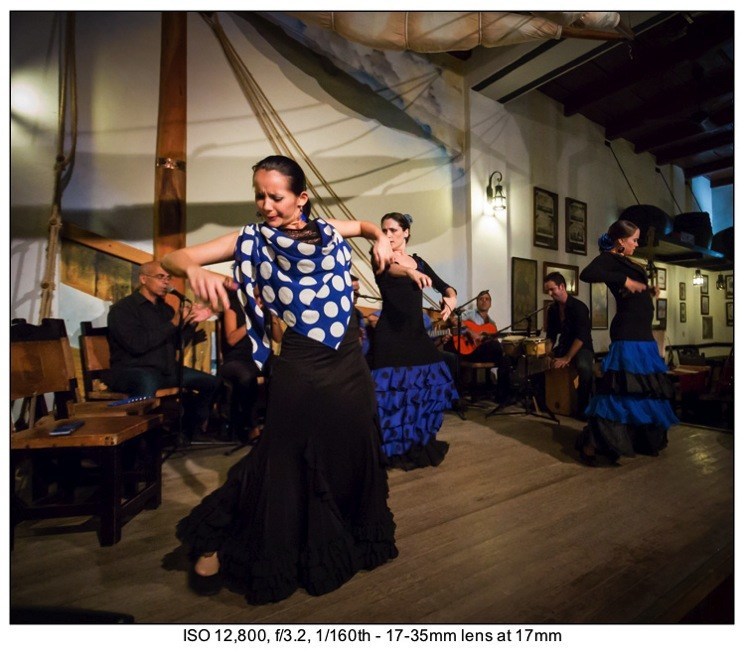 In this image of the flamenco dancers I’ve used ISO 12,800 in order to get 1/160th of a second shutter speed. Even at that you can see some blur in their hands and skirts. I wanted to freeze them, at least partly but if I have used say ISO 800 (4 stops less) my shutter speed would have been 1/10th of a second. Not only would I not succeed in freezing them, but I’d probably have gotten an overall blurry image due to the shutter speed being less than the focal length of the lens.

See my article 5 Tips for Getting Sharper Images on Digital Photography School for more on that subject!

Same deal with the photo of the sunglasses above. I was pushing the boundary a little on this one with 1/25th of a second and 35mm lens. But wide lenses are a bit more forgiving on camera shake, and I had my elbows firmed resting on the table.

So it’s a trade off. Perhaps you get a bit more noise, or even a lot more. So what?! Isn’t that better than an entire photo that’s blurry? Personally I’ll take a little noise over blur any day – especially since Lightroom and Photoshop and many other tools out there do such a great job at removing some, or all of the noise.

You do sacrifice overall image quality a little in that you may lose contrast and saturation, but you tell me that shot of the dancers above looks flat and colorless. I think it’s pretty darn good. Keep in mind I’m using a full frame Canon 5D Mark III which is a high end camera – but I’ve seen student images from newer model Canon Rebels, and Nikon D7000’s that do almost as good a job. It has more to do with the age of your camera and sensor as gains in good high ISO is a recent advancement. I would not have attempted this with my original 5D Classic (didn’t push it past 1600).

Here’s the same image of the singer (below) before noise reduction has been applied. Even as it is here, still not too bad for ISO 12,800 right?

#2. USE A REALLY LARGE APERTURE

This sort of goes without saying, but I’m going to say it anyway as I see many newbies to photography making this same mistake. Along with no fear of high ISO, stop being afraid of using your largest aperture.

Not sure what a stop is on your aperture dial? Generally if you camera is like most it is set to ⅓ of stop increments with every click of your dial. So one stop = 3 clicks.

If you only have a kit lens and the maximum aperture (largest opening, smallest f-number) is say f/5.6 then you are a bit limited in low light situations. But have no fear there is an inexpensive solution.

One of the first lenses I recommend my students purchase is the 50mm f/1.8. Whether you use Canon, Nikon, Pentax or whatever – it is generally an inexpensive lens ($100-190 depending on your camera brand), it’s light weight, and very versatile with the large aperture.

This shot in low light with a kit lens at f/5.6 would not even have been possible. Even with the ISO cranked to 12,800 at f/5.6 the shutter speed would be 1/5th of a second. WAY too slow for hand holding and a moving subject. If you have the f1/8 version of the 50mm lens your shutter speed would still be okay at 1/50th.

Sure I could have used flash but it takes away from the stage lighting and distracts everyone else watching the show. Not to mention blinding the performer. So I choose to do this type of thing “au natural”. 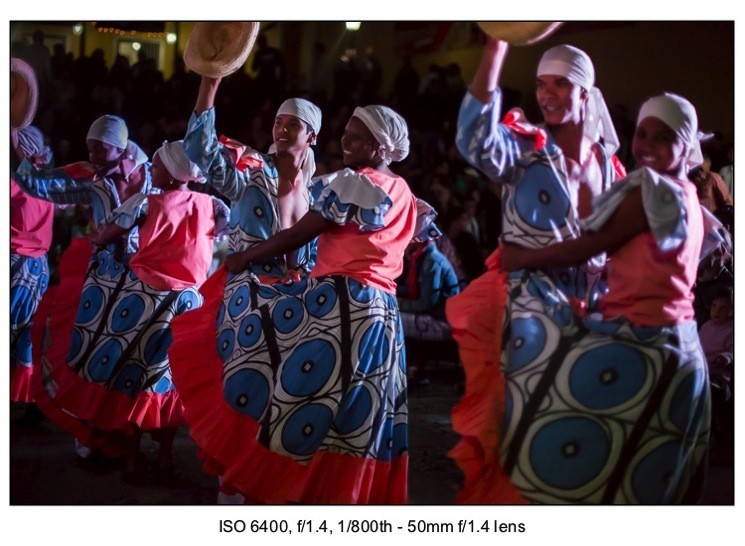 The image above was taken at an outdoor dance party in Trinidad, Cuba. The dancers were really moving fast and in order to freeze them I needed both a high ISO and large aperture. See how that comes together?

Take another look at the street scene at the top of the page. I did not have a tripod with me in this case so once again the higher ISO and large aperture helped me get the shot. I also was squatting down and put my elbows on my knees for more stability.

Same with the B&W shots below. I could have used a smaller aperture but I wanted the really shallow depth of field. In this case I could have used a slightly lower ISO but I was balancing the camera almost on the ground, used Live View to focus manually, and shot from there. NOT the most stable position. 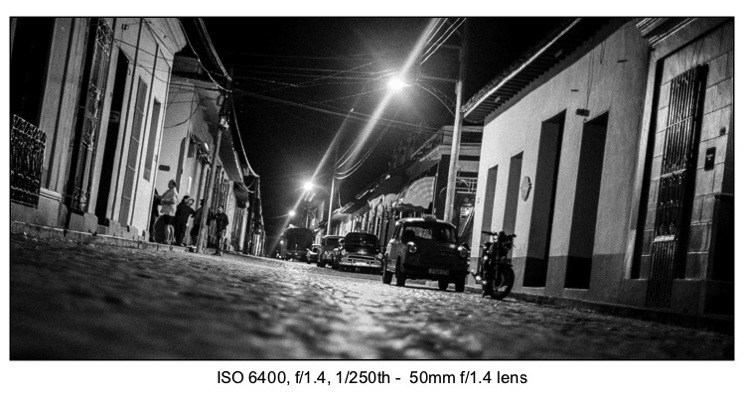 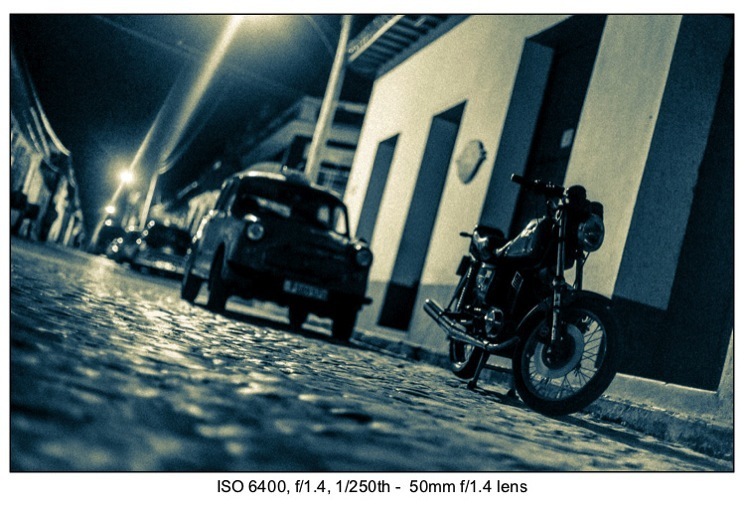 Many newcomers seem to have an aversion to using a tripod. YES it slows you down. YES it’s more cumbersome and you have to haul it around. But it’s the best way to get a crisp, sharp image in any exposure length. It’s essential to night photography where exposures over up to and over 30 seconds are not uncommon.

Slowing down isn’t a bad thing either, in fact I recommend it. Rushing often results in missed shots due to wrong camera settings, poor composition, bad lighting, or all of the above. Take your time. Choose your settings and do it right. A tripod is your friend, I promise. 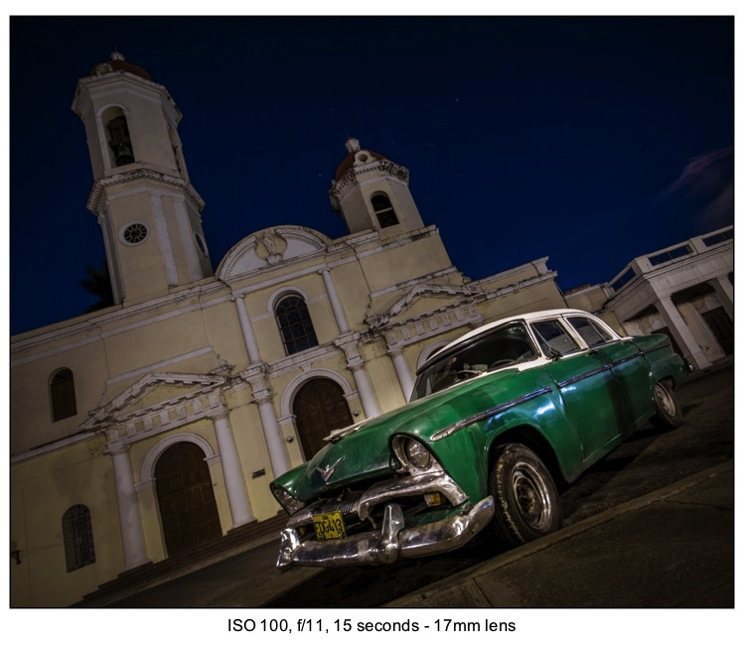 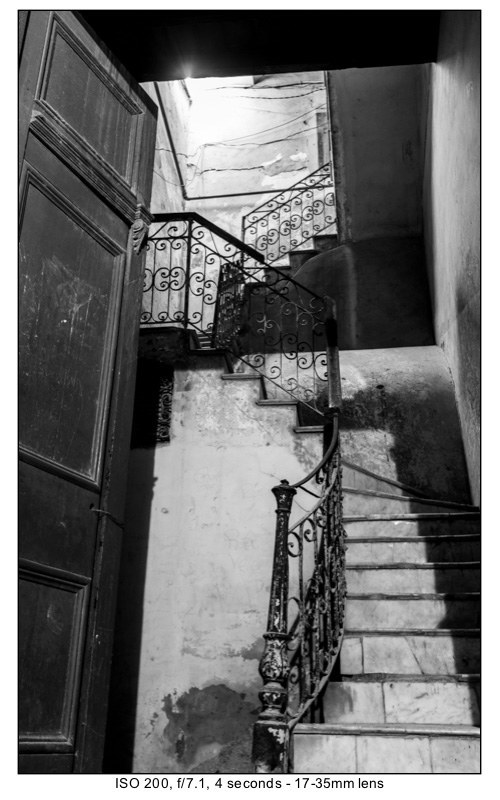 Look at my exposure times on these two images (left and above). With shutters speeds of 15 and 4 seconds these shots are not possible hand held. They would be one big blob of blurry mess. I wanted the extra depth of field in the shot of the old car so that the church in the background was relatively sharp also.

The noise reduction I mentioned above is far more effective if you are working with a RAW format file, so if possible start using that format. If you aren’t ready for that yet you could look at some other options like the Topaz DeNoise which does a really nice job on JPGs as well.

So here’s my challenge to you. If you’ve struggled to take photos in low light get out there and try it using these three tips. If a new lens is in your budget and you haven’t already got a 50mm, give that a consideration. Here’s some links to a few other articles (and products) that may help you out:

Have some other tips or suggestions? Please leave them in the comments section below and remember to share your images as well!

I’ll leave you with a couple more images of Cuba. I love this trio! Javier on the right is our tour guide’s husband. He traveled with us most of the tour and his trio sang for us the last night in Trinidad. They are amazing! Got the CD! 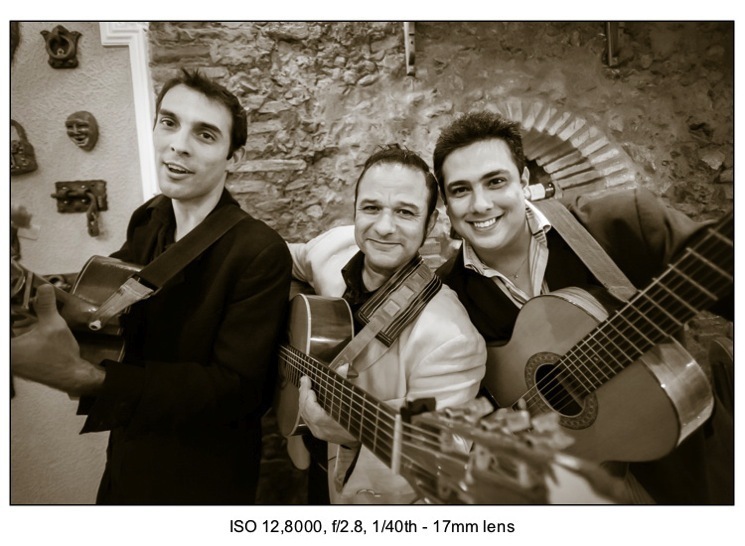 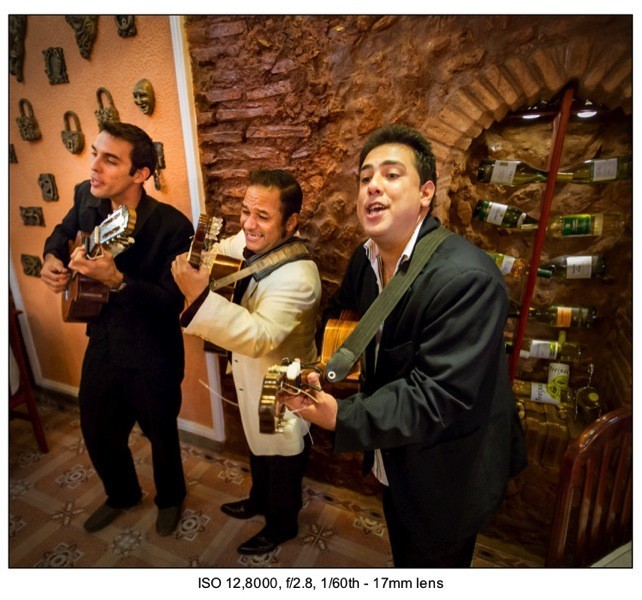