I do a lot of image critiques in my classes and photo tours and one question that comes up time and time again is, “how could I make this photo better?”

Often it is not a matter of anything that can be done in post-processing, or even at the time it was shot, but rather going back and shooting the same thing again at a different time of day. If the light is super contrasty and there are harsh shadows, cropping and camera angle really aren’t going to solve the problem. If the light is flat and boring, you can punch it up a bit in post-processing but the best plan is to return and shoot it again.

So I decided to do a little experiment to demonstrate to you just how much the light changes, and how important it is to creating the look you want for your image. Not only does the direction and quality of light change, but also the color. If you want to take better photos, read on and see if you pick up any tips.

The two sets of images below were shot from the same spot (or as close as I could get), at the same angle, using the same aperture and white balance settings. The only thing that has changed in each of the images is the corresponding shutter speed and ISO as the light changed – and take careful notice at the color tint as well. There were all processed minimally in Lightroom to adjust for the building tilt, lens distortion, and keep the exposures fairly consistent. But other than that I have not changed the white balance or done any processing magic on them.

As I am currently living in Granada, Nicaragua for two months this is the view outside our front door. It’s a popular tourist stop and we often sit on our stoop and watch the buses come, people get out and take photos, and they then leave. Because I would be doing this so often during the day I wanted a subject that was nearby and the light changes so dramatically on the face of the church it’s a great example. Let’s take a look. 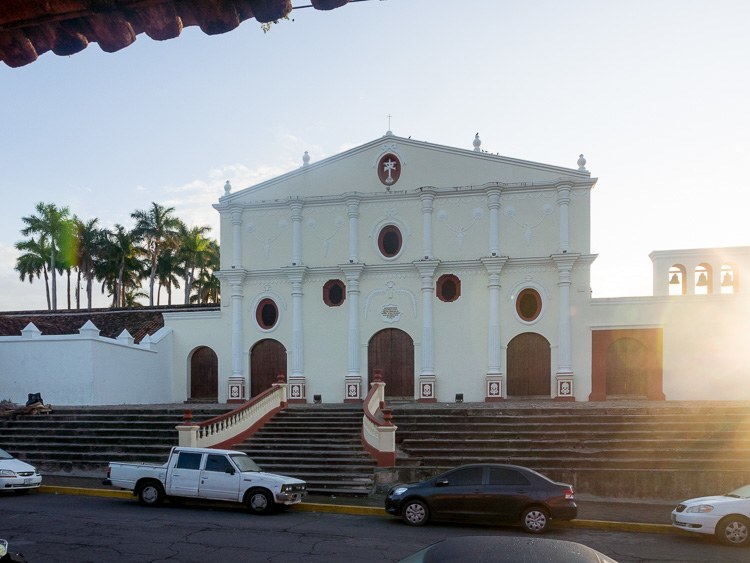 6 a.m. It is worth noting here I am NOT a morning person. Early for me is 8 a.m., so I must have been really motivated to do this for you! The church faces west so the sun is coming up right behind it. My timing was perfect, and yes I did go back to bed until 8 a.m. after I took this shot.

What do you notice about the lighting? Okay if you want a sunrise shot but the church itself looks kinda blah. Let’s continue. 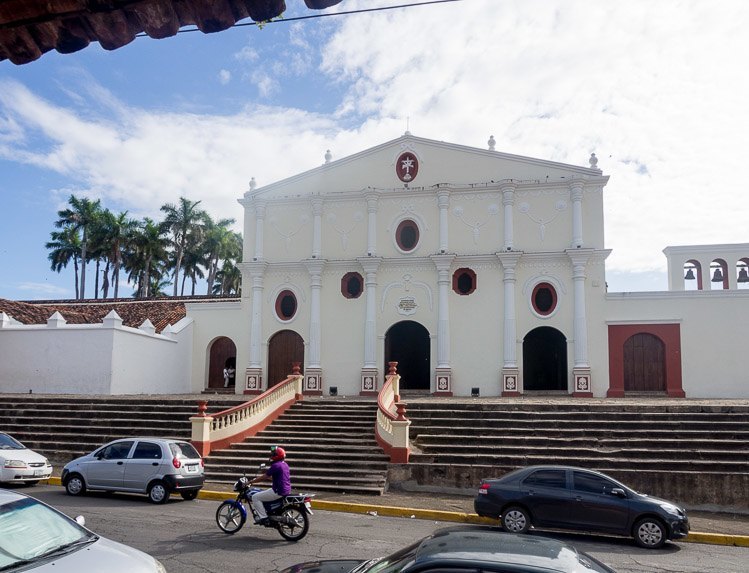 8 a.m. Now the sky is really bright and there is starting to be a little bit of light coming across the steps of the church but it’s still pretty flat. You’ll also notice it’s damn near impossible to get a shot of it without cars, a bicycle or horse buggy. 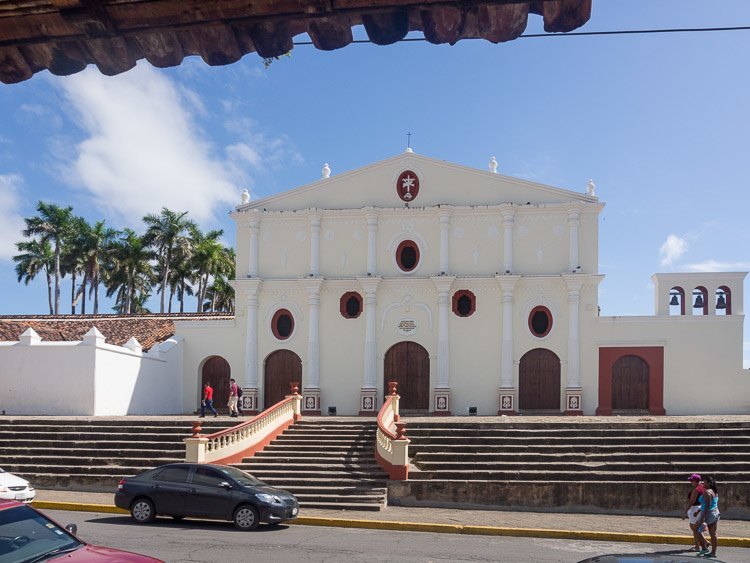 10 a.m. Can you start to see the side lighting here? Look at the curved railing and the shadow it is making on the steps. The sky is a bit richer blue as well. I have not used any filters for these images, just the light moving has made these changes. Noon Okay now we’re talking! Can you see what I’m seeing here? Deeply coloured blue sky, side light, shadows, texture and depth. That is what light direction does for your images. Compare this image to the ones above and notice how flat the front of the church looks in them. Did you even realize the columns were raised prior to this image? 2 p.m. Cloudy – when I went out to shoot on this time it was cloudy. I took the photo anyway to show you the difference soft light makes. What do you notice here? Does this image have more or less contrast showing in the scene and on the church?

Keep in mind this is neither good nor bad, it just is. If you’re photographing people it can be a good thing to have overcast or softer lighting. You can also get some dramatic cloud formations. If you don’t want the washed out white sky, just frame your image so you don’t see any or crop it out later. I recommend shooting as close as you can in camera though and trying to “see” the shot when you take it, instead of searching for it with the crop tool later. 2 p.m. Sunny – this is pretty nice too for texture on the church. Not as much cross lighting at the one at noon though, but still good. 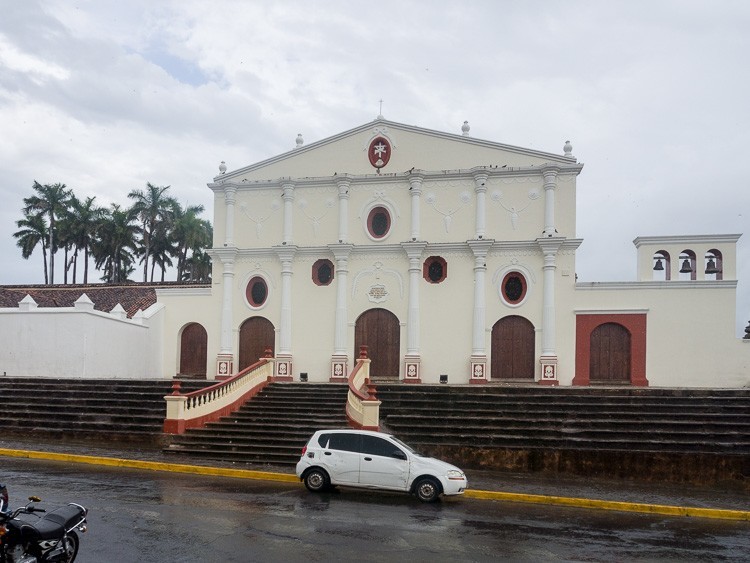 3 p.m. Rain! I took this as an example that sometimes shooting in the rain or inclement weather can help you get some unique images. So don’t be afraid to shoot in the rain, just cover your gear and make sure it’s protected. 4 p.m. Wow look at that sky! Now the sun is pretty much behind the building I’m shooting from, hitting the front of the church almost directly straight on. What a difference in the sky from the early morning images. Again I swear I did NOT use a filter here to make the sky blue or darken it in post production – it’s just like that. 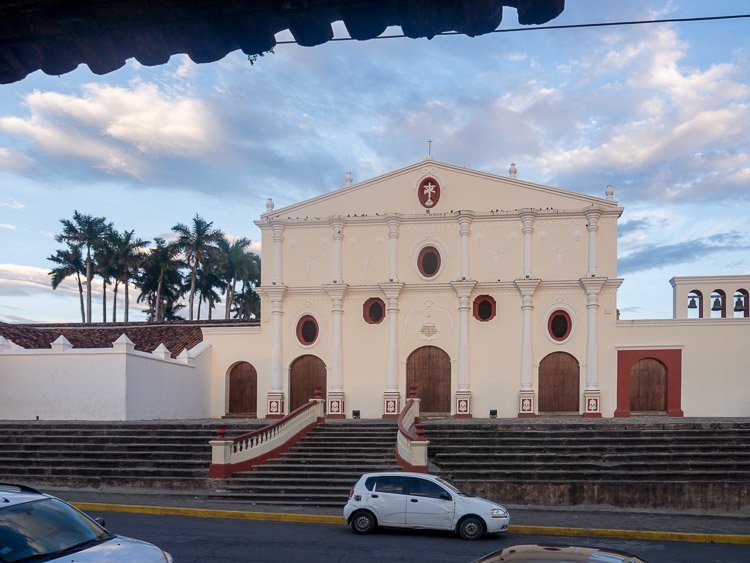 5 p.m. This is sunset time in Granada, Nicaragua or close to it. So there are some nice pink tones in the sky. The contrast is much lower and the overall feel is gentler. 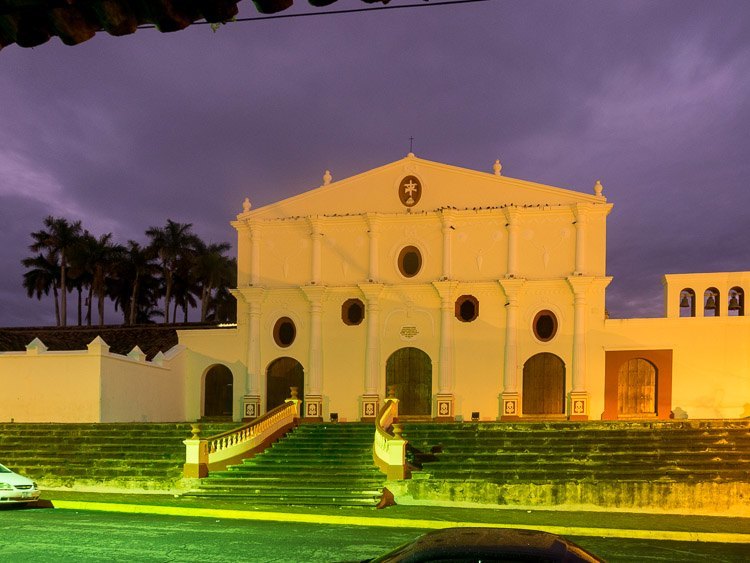 6 p.m. I got some crazy green street lighting showing up here, but notice how dramatic this looks. Blue hour, which is right after sunset, can be a great time to capture city shots especially. The lights come on, the sky is still blue not black, and it’s the type of shot that most photographers miss because they’ve already gone home or called it quits for the day and are doing something silly like eating dinner.

Let’s review. I have not used any filters on the lens during shooting, nor have I changed the white balance. All the images above were shot using the Daylight or Sunlight white balance preset. Of course, normally I would do some tweaks to the color in Lightroom but I wanted to leave it to show how much it changes during the day and how important white balance is to the mood of your image.

Here in Nicaragua it is very common to have your garden on the inside of your house. So in the house we are renting we have an inner courtyard and even a small dipping pool (about the size of a hot tub). The light actually changes so drastically that I have to move from one room to the other to work. Yes the sun is great but it’s really challenging to see a computer screen when it’s either in the sun or strongly backlit. Here’s how that series went down: 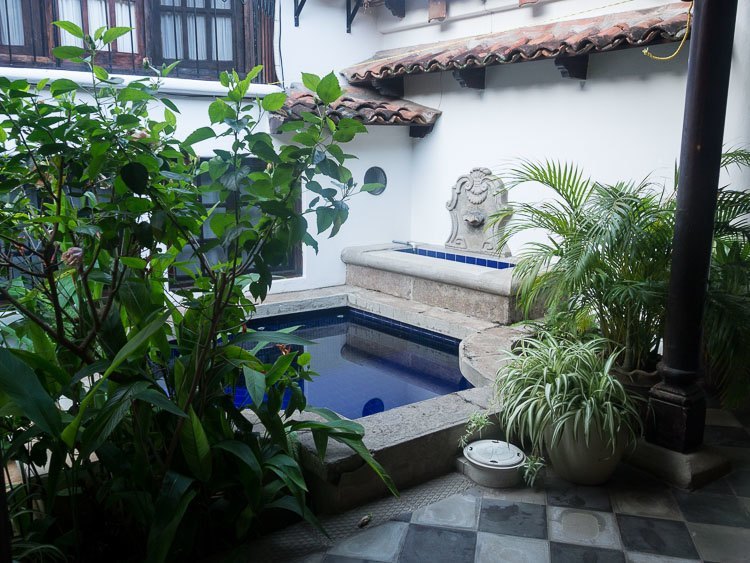 6 a.m. One thing to notice here is how blue this image appears compared to the following shots. Once again, all done at the same white balance setting and not adjusted in Lightroom. 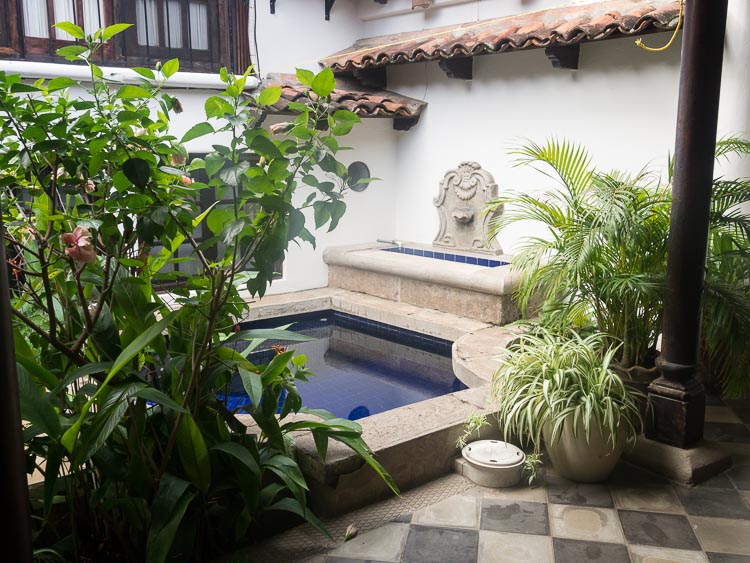 8:15 a.m. Roughly – not much difference in the lighting direction or feel, but the color temperature is much warmer than the previous image. 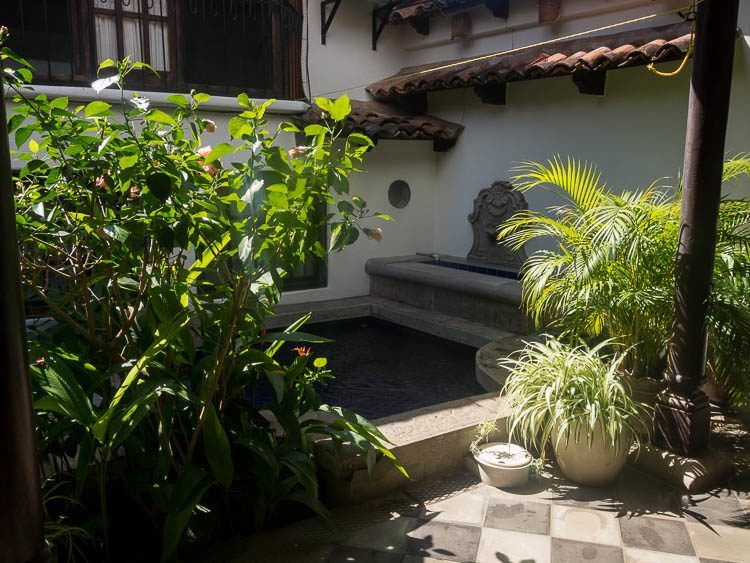 10 a.m. This is the time of day I either hang a big gray sheet up to block the sun, or move to another room. Yes is sounds like a rough life, but keep in mind the sun is also hot! You can see the huge contrast range in this image from the extreme brights of the floor and trees, to the deep shadows of the wall and pool in behind. 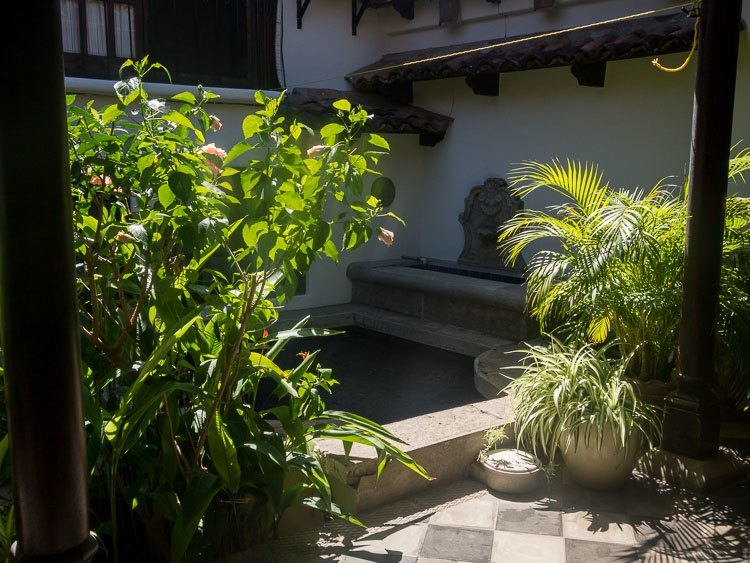 Noon Not a huge visible difference from the last image. If you look closely though you can see the shadows on the floor have moved. Can you see it? 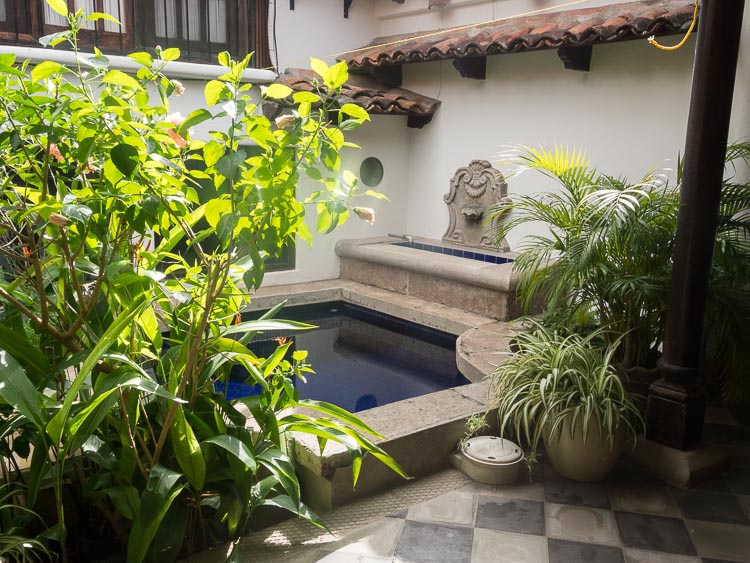 2 p.m. The shadows are longer in this image and the back wall is more lit up, reducing the huge contrast range that was present in the earlier shots. 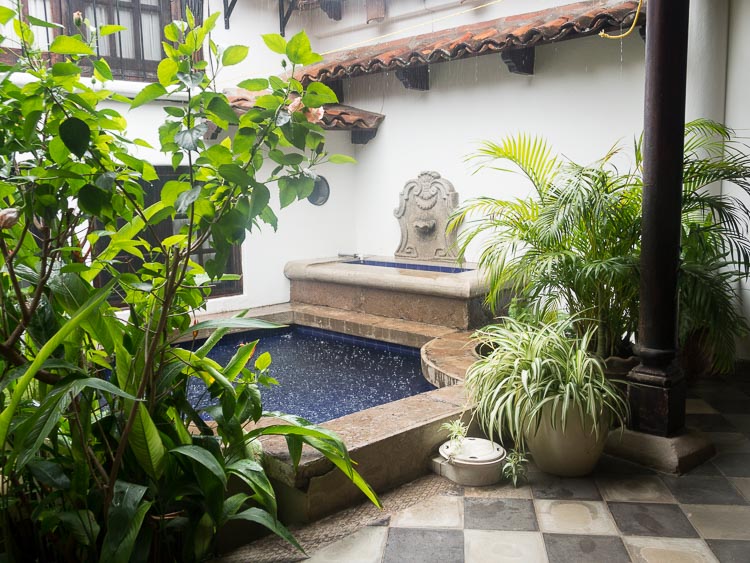 3 p.m. Afternoon rain shower! Pretty common here at this time of year. It rains for a few minutes almost every day, then it’s done and back to sunny. Can you see the rain in the air? Landing on the pool? Remember, think “different” and that will help you achieve “better”. 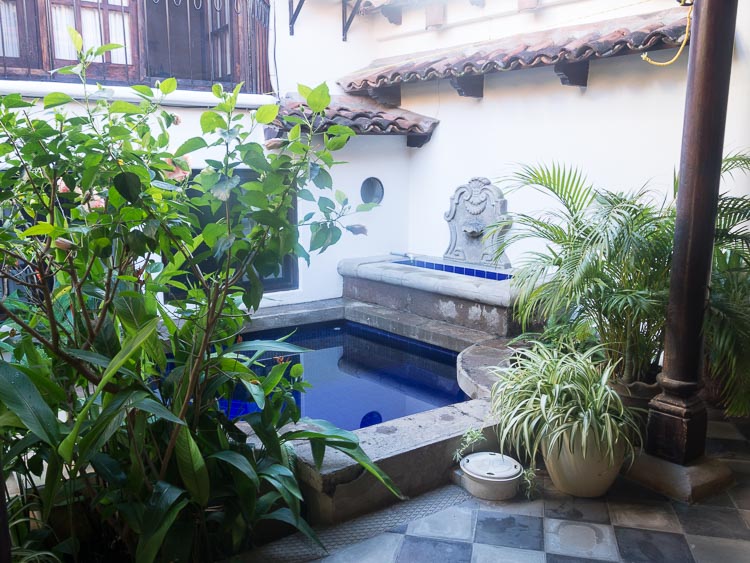 4 p.m. Notice once again how blue this image is overall. The sun has moved out of the courtyard and it’s all reflected light from the sky. Go look at the photo of the church at 4 pm again – what color is the sky? Hmmm . . . coincidence?

So what have you learned from these examples? You tell me? While you may not always have the luxury of coming back later, or planning what time of day to shoot your scene – it’s certainly a good idea to do it when you can. That often means just being out shooting at the edge of light – meaning just after sunrise, or the couple hours before sunset.

My suggestion and exercise for you is to practice this at home. Pick a subject really close like I did – I’d suggest your front or back yard even – and shoot it from the same angle, with the same lens, using the same white balance, at as many different hours during the day as possible. If you can’t get it all done in one day spread it out and tick off the hours you have done over a few days like I did. If it rains, shoot that too.

Please share in the comments below your observations on the example images and if you do the exercise share your images here too.